The Hollywood You Didn’t Know

A Star ― and Inventress ― Named Hedy

The documentary Bombshell is a must-see! Director Alexandra Dean has produced a fascinating film about the most beautiful woman in the world ― the 40’s and 50’s Metro Goldwyn Mayer (MGM) actress, Hedy Lamarr! Yes, the film does trace Hedy’s life as an Austrian child, born Hedwig Eva Maria Kiesler in 1914; Hedwig Kiesler became Hedy Lamarr in 1937 when she met Louis B. Mayer, the head boss at MGM.

Mayer was scouting for talents in Europe. He persuaded the star to change her name to Hedy Lamarr, choosing the surname in homage to the silent film actress Barbara La Marr. Lamarr’s Hollywood career began with a film debut in the movie Algiers opposite Charles Boyer in 1938, and that career carried on for many years in the days of Hollywood glamour.

Lamarr’s work in film first began in Europe when producer Max Reinhardt featured her in Gustav Machatý’s film Ecstasy, a role of a neglected young wife married to an indifferent older man. Ecstasy was a film that garnered world recognition, winning many awards. The film was an artistic work, acceptable in Europe but considered overly sexual in America where it was banned.

In 2014, Hedy Lamarr was posthumously inducted into the National Inventors Hall of Fame. Howard Hughes supported her tinkering. She designed an improved traffic light and a water-dissolving tablet to create carbonated beverages, among other things.

The beautiful Hedy was not only an actress, but also an inventor. She looked for ways to create what some believed could never be created. In her spare time, she worked designing an improved traffic light and a tablet that could dissolve in water and create a carbonated beverage. She even found Howard Hughes to be on her side when he told her he would support all her tinkering invention hobbies. Hughes offered Lamarr all of his science engineers to assist her.

In 1962, during the Cuban Missile Crisis, an updated version of Hedy’s patented frequency-hopping signal technology was used on Navy ships, and this same technology contributed to the development of Bluetooth, Wi-Fi, and GPS.

Lamarr was born to a Jewish-Austrian family who had escaped the Hitler regime and wanted to put her skills to use. She learned that radio-controlled torpedoes used in naval warfare and could be jammed, causing the torpedoes to go off course. Lamarr would develop a frequency-hopping signal that could not be tracked. With her friend, the composer and pianist George Antheil, the duo drafted designs for the frequency-hoping signal, which they patented.

The invention was granted a patent on August 11, 1942 and filed using her married name, Hedy Kiesler Markey. In 1962, when the Cuban Missile Crisis was in full motion, an updated version of the design was used on Navy ships and this same technology contributed to the development of Bluetooth, Wi-Fi, and GPS.

In 1997, Hedy Lamarr received the Electronic Frontier Foundation Pioneer Award and the Bulbie Gnass Spirit of Achievement Bronze Award, given to individuals whose lifetime achievements in the arts, sciences, business, or invention fields have significantly contributed to society. In 2014, Lamarr and Antheil were posthumously inducted into the National Inventors Hall of Fame. Hedy Lamarr might not go down in history as the movie star of the century, but she will go down as a star in my eyes every time I get into my car and search for my destination with my GPS. Pure ecstasy to me!

How I Met Hedy

Back in the 1970s, I was writing books published by the Bobbs-Merrill Company.  My editor at the time was a beautiful young woman named Roxanne Loder.  Roxanne was married to Tony Loder, Hedy Lamarr’s son with actor John Loder.

Roxanne invited me one evening for dinner in New York City.  The table was a small gathering, maybe eight or 10, and my dinner partner was the still very beautiful Hedy Lamarr.  I recall her outfit, a white patent high boots and a Mondrian color blocks dress- royal blue, yellow, red, and white.  She was like a painting.

Our evening was spent discussing the contacts of a book, Ecstasy and Me, for which Miss Lamarr was the author (with co-writers Leo Guild and Cy Rice).  Miss Lamarr wanted no credit for the book, “All not true,” she told me.  She wanted to pen another book claiming the original was not factual.  The new book never happened but what did happen was a moment to talk with the lady herself.  Hedy Lamarr was truly perhaps the most beautiful woman in the world, she was a classic! 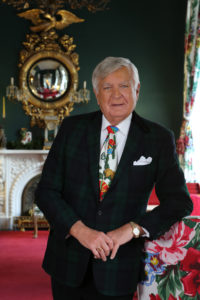 The Bartletts, The Birches, The Arts & Bonnet House