In the late 70’s, while staying at her house in Tuscany, Edwina made friends with many Italians, including Carlo Nicoli, who ran the marble Sculpture Carving Studio in Carrara, the city where Michael Angelo made many of his fabled works. 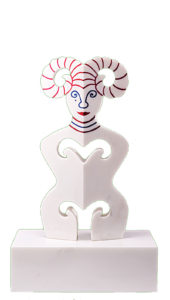 Carlo offered Edwina some beautiful white Carrara marble and persuaded her to make a sculpture. While continuing her work in bronze as well as painting and drawing, she began experimenting with this new material ― totally different from anything she had tried before. “With clay I can endlessly change my mind ― put a nose on, turn it up, push it sideways, squish it down. With marble, once it’s cut, that’s it!”

With that in mind, she purposely started with some flat pieces. The first finished sculpture was an eight foot Adam & Eve, simple silhouettes of a man and a woman. Eve’s  figure has two cut-out hands, as it were, to hide her breasts. Adam’s own cut-out hands are strategically placed to cover both his own and her nakedness. 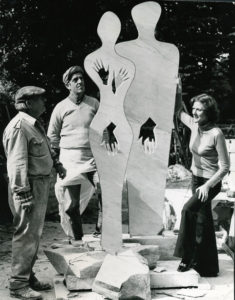 Sometimes her stylistic choices led to surprising reactions.  Her father, Duncan Sandys, asked her why she made these sculptures so sexual. “But Father,” she replied. “Look! I’ve intentionally left all those areas out.” He replied succinctly, “That only draws attention to them.”  This was an early example of Edwina’s use of negative shapes, much like her earlier line drawings.

By chance in 1980, Edwina stumbled upon a new way to work in marble. One of her flat sculptures, Thin Woman, had been accidentally knocked over and broken into three pieces. When mended the joins were still starkly visible. To draw attention away, Edwina cut a tracery of lines all over the white marble, then smeared it with bright colored pigment mixed with resin. After the piece was polished the color remained only in the incisions.

In April of this year, Edwina returned to Carrara to make 10 new marble sculptures, in the style she had invented over 30 years earlier. She was working in the same vast 30-foot-high studio, with the same family, but now with Carlo’s daughter, Francesca.

Questions I Wish I Could Have Asked ... Hugh Hefner

The Many Facets of Ben Fronckowiak

Magical Realism Of A Cuban Dreamer

By Robin Jay Seeking a place of solace and refuge from the ravages of coastal pirates, in July 1689, nine Cuban families fled to the center of the tropical island where they...

By Kelly Villasuso Thirty miles north of New York City is an area so inspiring it has fired up the imaginations of authors and artists, moguls and underlings alike: Sleepy Hollow, New...

Royal Wedding Global Insights From The Perspective Of A British Nobelman

By John D. Adams There are some events that are so rare, so special, that it seems the entire world stops to take notice. A British royal wedding is one of these...

By Todd R. Sciore “The origin of medical quackery is probably as ancient as the origin of medicine” ― The Boston Medical and Surgical Journal (1893) Few people have taken the fraudulent practice of...

HAIRSPRAY RINGS IN THE NEW YEAR AT MIAMI’S ARSHT CENTER

Broadway’s THE PROM in Ft. Lauderdale!