Living the Dream, his trademark catchphrase, and a firm handshake follow Ray Bouderau in Los Angeles, New York or Palm Beach. He exudes youth, intensity, and joie de vivre, coupled with a broad smile wherever he goes. As I prepared for this interview, and trust me, I do thorough research of all my subjects, it became apparent that Ray lives up to another firm belief of his, “less is more” to the fullest.

“I don’t have a bio,” Ray told me. “Look me up on IMDb and visit my website LTDFILMS.COM.” I did. None of the information fully does justice to Ray Bouderau, a man I’ve grown to know and respect for what he has achieved at his young age doing it entirely “his way.” Robin Jay, my Editor-in-Chief who met Ray during a recent weekend visit to Palm Beach, and I decided to do something about it. We invited Ray to talk to us about what it took to realize that “life is too short to live someone else’s dream.”

Ray’s astounding focus and business acumen led to remarkable accomplishments in New York’s restaurant and construction businesses, paving the road to his life’s passion: Love for acting, developing, and producing motion picture and TV projects. Seldom do I meet an individual whose appreciation for a life he has created for himself and his beloved daughter, 14-year-old Jordan, is more apparent.

Skyscrapers are great, but the 9-11 Memorial is the only meaningful thing really that I have ever built.

Ray’s generosity is heart-warming, but his humbleness is what impresses me most and manages to surprise me daily. As I am getting to know him, calling Ray a friend inspires me to live my own dreams, and for that I am very grateful. Here’s a glimpse into my interview with this Renaissance Man …

Ava: How do you manage to balance the pressures of a multi-faceted business and being there for your daughter, raising her on your own since the death of your wife? 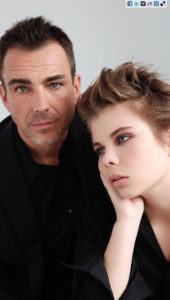 Ray: I show up, play my part and then let go and let the results play out. My daughter ― she’s effortless ― a total asset. There really isn’t any pressure. To honor her Mom and help others, we both decided to set up a non-profit in her memory.

Ava: Tell us about the fund you created in her memory?

Ray: Kristen Bouderau Cancer Foundation is a non-profit that we started in my late-wife’s honor to help raise awareness for breast cancer. We are filing for our 501c3 certification. We’d like to serve her memory by helping others.

Ava: Would you call building the World Trade Center Memorial your first act of charity?

Ray: I would not consider that work charity in any way shape or form, but I am truly honored to be one of the many people who worked on that project. They actually did me a favor my allowing me to participate ― not the other way around.

Ray: I watched the horrors of 9-11 first hand from the Jersey side of the Hudson River. After the events, because of my construction background, I volunteered for several days on sight.  Much later, when the project came out to bid, I was eager and excited. I was lucky enough to land the project and it really meant the world to me. I have never had the desire to build anything the way I wanted to build that; to become part of New York’s history. Office buildings and skyscrapers are all great, but the memorial is the only meaningful thing really that I have ever built.

Ava: How many projects have you completed since?

Ray: I started the Living the Dream film company two-years ago and have been involved with making six films. I select the projects by trying to marry entertaining products with solid business goals. On the construction side it works differently. Customers come with a project and I have to bid for it. I can pick and choose customers, but ultimately not the specific projects.

Ray: In most of film projects, it is less about making money than not-losing money. I want to shed light on dark places while making entertaining content. Making money certainly isn’t always the end game. But like the Monte Carlo Simulation (the probability simulation) ― if you make a certain number of endeavors, one or two successes make up for losses.

Ava: In the eyes of many, me included, you are already having an extraordinarily successful life. When and why did you create Living the Dream?

Ray: About two years ago, I had the idea of transitioning into the entertainment field because it was the only thing I had ever wanted to do that I hadn’t done yet. Construction gave me the freedom to do so; it was really about why not, as opposed to why? I have always had a love for film and TV and I think I am a natural story teller ― now I’m trying to find out if I am as smart as I think I am!

Ava: What inspires you most about the show business? Is it the fast pace of change in the industry that fascinates you most?

Ray: No, I just want to entertain people and I want to be entertained. I spent my youth in front of the television and I want to bring that level of entertainment to others. I always thought I could make a bad movie good and a good movie better. Tell a story that NEEDS to be told, but in an entertaining way.

Ava: Who put you on this path?

Ray: Bruce Willis! I was bar tending in my 20’s; I wanted to get noticed and become the next Bruce Willis ― and I’m still surprised it didn’t happen. I’m much older now, so I figured it’s time to make a run at it.

Ava: When the movie theaters become completely obsolete, what will you miss about them?

Ray: I don’t think they will ever become obsolete. They are transforming and becoming more luxurious, more of an experience. Like Broadway, I think it will continue to live, improvise and adapt.

Ava: What does your 14-year-old daughter think about that?

Ava: What is your favorite motion picture or TV show and why?

Ray: Too many to name. I love the content of Armageddon with Bruce Willis ― it had everything I want. Forrest Gump, The Godfather. Friday Night Lights is a great TV show. My taste and filming objectives are pretty diverse.

Ava: The Public, 10 years in the making, is your latest motion picture. It’s poised to be a major success. What inspired you about this project? Why this story-line of homeless people making a public library a refugee?

Ray: I believe it’s a story that should be told to start a conversation, get people thinking and talking, and do it in an entertaining way. The Public did that for me. Plus, I am a huge Emilio Estevez fan. He stars in and directs The Public. It was a true honor to work with guys like him and Michael K Williams. It was really a no-brainer. The film also stars Christian Slater and Alec Baldwin.

Ava: What’s next for Ray Bouderau, a father, a mogul with a heart, a visionary, but above all, a friend?

Ray: Tomorrow. We will see where the universe brings me tomorrow.

Questions I Wish I Could Have Asked ... Hugh Hefner