A couple caught mid-dance on a twilit Cuban street. A man and woman share a cherished kiss in front of the glittering Louvre Museum. A stolen moment shared on a rope bridge high above a Kenyan forest. Wedding photojournalist Ron Soliman has an uncanny ability to feature the most intimate moments in the most unexpected ways. “Whenever we do destination weddings, I always try to do something different,” said Soliman.  “I want that flavor of the locale without it being cliché.” But there is one other key ingredient — passion.

Soliman’s work emphasizes an exotic, emotional connection to any viewer, even those unfamiliar with the couple in the picture. At the same time, he is expressing his own passion for photography, for fascinating destinations, and for a belief in the romanticism of love. Isn’t that what great art strives to do?

The Story of You

Ron Soliman couldn’t make the pictures he does without being granted entrance to a more casual, more intimate side to his clients. That takes a genuine, warm, and enthusiastic personality; combined with cat-like reflexes to catch the best moments on camera. “I think one of the things I always feel when I’m on these jobs is that I get to do what I’m passionate about. But more than that, I feel such joy working with all of these couples.”

His photographic speed, self-reliance, and instincts were honed after years of working for major newspaper chains as a photojournalist. His warm, open demeanor and quick connections with people perhaps comes from years of studying in the Seminary. “I always begin by telling my clients that ‘I will tell the story of your day. And I will tell that story through pictures. As a photojournalist, when things happen, I’m going to capture those special nuances. My passion is capturing moments at your wedding.”

Don’t let the title of photojournalist throw you. Soliman emphasized that unlike many of his peers, he doesn’t restrict his services. “I will do all of your traditional shots for your wedding, too. Because I know that people like to frame those on their walls. So I’m all around during the wedding … I try to capture the unusual. I try to capture those moments of love. But I can also step in and direct a shoot when needed.”

As we review photos for this story, Soliman’s mood turns reflective. “Every wedding is different for me, every couple is a new friendship and connection,” he began. “And because of that, it encourages me to continue with this passion. My wife works with me, and we’ve been married for 14 years. We teach ourselves about love through all of these relationships that we photograph. I think it is also a message. When I was seriously studying to be a priest, you know that even though you can’t marry, you preach about love and commitment.” Soliman is still preaching love and commitment — through his photography. 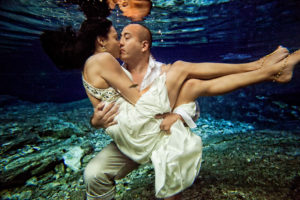 Mexico: “I heard about these underground caves, the Cenotes, from friends who live in Mexico. These were very spiritual places for the Mayans. They are perfectly clear at a certain time of day. So when this couple suggested a photoshoot on the beach in Mexico, I recommended we do something underwater in the Cenotes. They loved the idea, but were a little concerned since she couldn’t swim. This photo really shows how he is caring for her, holding her. And the fish shadow passing by his heart is one of those happy moments that photojournalists hope for.” 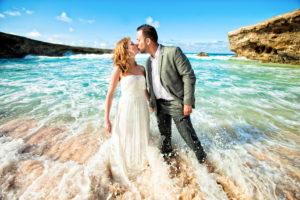 Aruba: This is a beach I discovered in Aruba. Not a lot of people go there because the waves are very rough. So when we did this photo shoot I was worried for them, but I always keep a main focus on safety first. This image is a message. A message that this couple will stand together against any wave that comes up against them in life. The picture was actually featured in some advertisements for Aruba, too.” 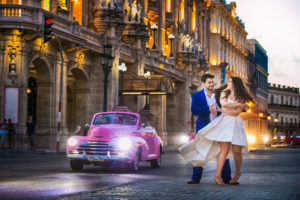 Cuba: This was a crazy shoot! It was so hot, and the couple weren’t used to that environment. So we were shooting quickly to keep them from sweating too much. I already had an image of what I wanted. I wanted it to look like Cuba, with the architecture and the perfectly maintained 1950 automobiles, but I also wanted to have some action and movement. We tried a couple of shots with them just standing in the street. But then I remembered that they love to dance and had taken lessons for the upcoming wedding. So I suggested they start practicing. And when that car drove by, I knew I had frozen a great moment.” 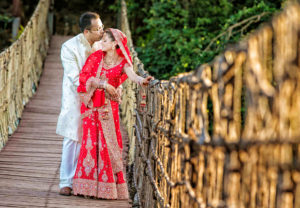 Kenya: This India couple are doctors in New York. He was from Kenya originally, which to my surprise has a large Indian community. I didn’t want to shoot just an ordinary ceremony in the temple there, because that would have looked like any other place in the world. The man knew exactly what I was thinking, and since he grew up in the area, he drove us an hour away to this amazing hanging bridge. Under that bridge was truly wild, with boars and other animals roaming around. That is Kenya.” 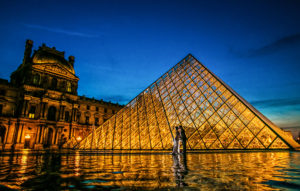 France: We actually shot for a full 12-hour day with this couple. We all had so much fun, we didn’t want to stop. We did the traditional shots around the Eiffel Tower. As it grew late into the evening, I suggested we do some pictures at the Louvre. I wanted to show how huge this pyramid is that everybody is talking about. I got creative with the light to create a lot of glow around them. It was freezing and late at night, but we were lucky because nobody else was around.” 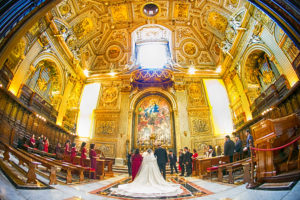 The Vatican: “This couple was the same couple I worked with for their engagement photoshoot at the Louvre. They were so happy with how those pictures turned out, we were so happy to work together again. There was a sudden opening in the Vatican calendar, so the couple moved up their wedding date, which worked with my schedule. It is such a beautiful, opulent, serene place, St. Peter’s Basilica. So I used a fisheye lens to capture the grandeur of the church.”

Venice, Italy: “While this shoot was not for a wedding, it was a shoot for the bride. She was a model and lived in Venice. I thought it would be a fun change of pace. So we were able to play a lot with light and environment to try and capture the flowing veils, and her mask represents the Venetian culture.”

To contact Ron Soliman and to see more of his work, visit his website at: www.ronsoliman.com  John D. Adams is an award winning writer and photographer.