Barton G Whips Up The World’s Most Instagrammed Dinnertainment

So, food enthusiasts, get your cameras ready as Eloquence takes you on a visual Instagram trip into Barton G’s whimsical world of pure creativity, imagination and delectable gastronomy.

Barton G, a whiz of grand foodery, has unveiled his most creative and spectacular new dishes and experiences, taking his signature “dinnertainment” to the next level. His hand-selected team of designers and craftsmen diligently take months to create every season’s culinary stage to push the envelope on experiential dining.

Already a trendsetter in the industry, especially as the creator of the outrageous liquid nitrogen cocktail and #foodporn, Barton continually dreams up new, authentic, edible concoctions. To celebrate the 12th anniversary at Barton G’s Miami, he authored his first cookbook, The Big Dish: Recipes to Dazzle and Amaze from America’s Most Spectacular Restaurant. In it, the culinary ringmaster shares how to create unforgettable food and over-the-top presentations, with visually compelling dishes that may not actually be quite what they seem on first glance.

To ensure dishes prove as exquisite and delectable as the original outrageous installations they arrive on, Barton calls upon the mastery of Corporate Chef and Culinary Director Jeff O’Neill, whose culinary pedigree heralds for working with such esteemed chefs as Eric Ripert, Daniel Boulud and Charlie Palmer. Chef O’Neill and his exceptional team of chefs know there are no limits at Barton G, where they create, design and bring to life their wildest dreams. “It’s a world without boundaries, so expect the unexpected!” Chef O’Neill said.

A Visual Taste of Barton G’s 10 Most Instaggrammed Dishes

First, the show stopping Marie Antoinette’s Head – Let Them Eat Cake is a towering cotton candy pompadour with yesteryear candies, and a Bananas Foster “shake,” along with vanilla panna cotta, gianduja brownie, caramelized banana cream and chantilly. (As featured in the masthead).

Fourth, Sabrinatini, which shakes up Absolut citrus vodka, watermelon sorbet, and St. Germaine, topped off with a champagne popsicle. 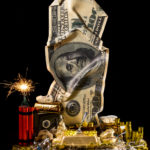 When dining at Barton G’s, keep your cameras nearby and remember the more outrageous the better. Share your photos from coast to coast. http://www.bartong.com